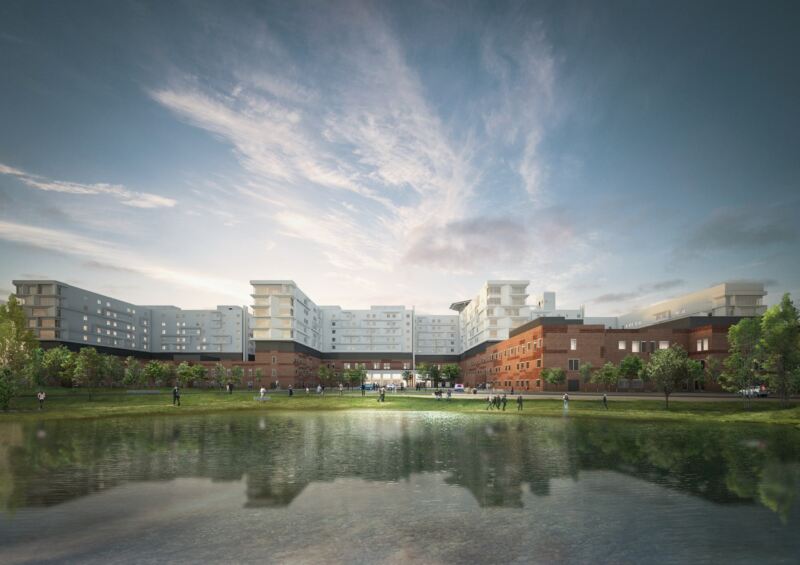 A big milestone has been reached in one of the most prestigious logistics projects at a Danish hospital.

Zealand University Hospital (ZUH) in Køge, Denmark has just selected a supplier of self-driving mobile robots for its logistics operations. At a total price of 3,1 million euros, the purchase of the 35 robots is the single biggest investment of its kind by a Danish hospital.

Gain & Co acted as the hospital’s independent advisor on the project, securing a successful tender process according to the Project Head of IT & Equipment at the hospital, Frank Hansen.

“The work done by Gain & Co has helped us achieve a competitive tender process,” says Frank Hansen, Project Head of IT and Equipment at ZUH.

Each year, the hospital has to reduce operational expenses by 7 percent. Using robots for automated transport is a key strategy for the hospital to meet this target. The robots will, according to Frank Hansen, both reduce strenuous work for employees and make logistics operations more efficient.

“In this aspect, it has been essential that Gain & Co with their knowledge of the robot market could help us get several good offers from suppliers closely competing on price, quality, and time horizon,” he says.

It is still new and relatively untested territory for many hospitals to implement mobile robots on a larger scale. Getting it right for ZUH has required several years of careful planning.

Once the robots take over transport from next year, it will be at an unprecedented scale for the hospital. The robots will in 2025 cover both the existing hospital and 185,000 square meters of new hospital buildings doing more than 2,000 transports per day.

“This is critical infrastructure for us. If the robots fail, we will have to revert to manual transport. The last resort could be to evacuate the hospital. That’s why it’s so important to start planning early,” says Frank Hansen.

One of the first things the hospital needed to uncover was how the robots would interact with the new and existing buildings. Gain & Co conducted a thorough review of the facilities and provided a comprehensive list of requirements for the robots to work.

“The things that can become a problem for a robot can be very different from those to a person. You need to know how the technology works to spot these issues in advance,” says Mikkel Viager, Senior Robot & Automation Advisor from Gain & Co.

One example was missing wifi in elevators. Without it, the robots would lose connection with the fleet management system as soon as the doors closed – with the risk of getting stuck. Another example was glass doors: The robots might run into them because the glass confuses the sensors.

“Finding all these potential issues early on has made it possible for us to fix them before the robots arrive. This means we get a more reliable solution,” says Frank Hansen.

Standardization dilemma had to be solved: Robot or cart first?

Before finding a mobile robot solution, the hospital had to solve an interesting dilemma: Should they make the mobile robots fit the existing carts they had to transport – or the other way around?

If the robots had to be made compatible with many different types of carts, the hospital would risk getting a very expensive solution ¬– or none at all.

On the other hand, replacing the entire fleet of carts to fit a certain robot could also prove very costly.

Gain & Co came up with a more effective solution. It enabled a competitive tender process while keeping existing carts. The idea was to specify a standard undercarriage fitting the different types of carts – while keeping enough space for the size to vary so it would also fit a broad spectrum of current robot solutions on the market. Now, that a mobile robot solution has been found, the hospital can provide the final specification for the standard undercarriage that fits the robot.

“It’s important to standardize how new and existing carts are connected to the robots. Without standardization, we would have to either buy new carts or resort to manual transport in some cases. Both would be costly and work against the purpose of automating,” says Frank Hansen.

In a young market, a conservative solution is good

It can be particularly tricky for a public institution to deal with the procurement of new technologies such as robots.

Each year, many new solutions enter the market with big fanfare – while others disappear quietly. As only a few hospitals use the technology, there are only limited experiences to share. For a new hospital customer, it can be difficult to sort the good solutions from the bad ones. To complicate things further, asking suppliers for advice opens up a conflict of interest.

For ZUH, this was a key consideration when choosing Gain & Co to make the requirement specification and conduct the tender process for the mobile robots. As an independent advisor, Gain & Co does not sell any robots.

“We always expect our advisors to be independent. As a customer, the robot market is like the IT industry was 20 years ago. It feels like the Wild West where you risk getting locked in with a vendor for a long – and expensive – time if you are not careful,” says Frank Hansen.

Getting locked in with a certain vendor is a very real risk according to robot engineer Mikkel Viager. When making requirement specifications, a wrong judgment could disqualify vendors that would otherwise be a great fit, he says.

Take the operating system of the robots’ fleet management, for example. Many IT departments prefer to set strict requirements only allowing a few well-proven enterprise solutions. Since many mobile robot systems use different distributions of Linux, hospitals either risk excluding the vast majority of suppliers from bidding – or adding large expenses to the project for customization.

In the end, the years of preparation and analysis paid off for the hospital in Køge. The tender process resulted in several strong bids from suppliers offering their robot solutions. And Frank Hansen is optimistic about the winner:

“The winning robot solution is not using bleeding-edge technology. It’s conservative in the best sense of the word: We know it works and that the supplier can deliver. In the end, that’s what matters,” concludes Frank Hansen.