“Without automation, we have less than 10 years left in Poland”

Salaries are rising rapidly in the otherwise popular outsourcing-country, Poland. Because of this, robots and automation are a necessity to maintain the local production, in the opinion of the Danish CEO of the electronics producer, Eltwin Sp.Zo.o., with a production site in Poland.

“It is over for Danish electronics production.”

These were the words of the head of the Danish Engineers Union back in 1988.

He predicted – quite correctly – that the time of Danish production was over. One could add that it was now over in Poland and other countries with lower wage bills.

But today, more than 30 years later, one could rightly ask if history is about to repeat itself.

The businesses that relocated production to Poland are faced with a situation of rapidly growing wages and record low unemployment. And for the first time ever, some begin to see a potential expiry date on the local production.

“In a decade, it will be over. Then we won’t be in Poland any longer due to wages – unless we do something,” says CEO of the electronics producer Eltwin Sp.Zo.o, Kim Strøm.

In his daily work, he leads a factory of 170 employees near the industrial city Stettin in Northern Poland, to which hundreds of Danish companies have outsourced their production over recent decades. But now many of them struggle to obtain and especially hold on to employees, he adds.

“Employee turnover in businesses down here has increased enormously due to the low unemployment, and because of this there is increased competition for employees,” he says.

“We have perhaps 10 good years left in Poland unless we automate parts of the production,” says Eltwin Sp.Zo.o CEO, Kim Strøm

Would preferably keep production in Poland

Ideally, Kim Strøm would prefer to keep the factory on Polish soil – but not just because of wages.

When Eltwin relocated production to Poland in 2011, it was exactly the low wages that made the difference. The financial crisis had hit the list of orders hard, and to avoid shutting down, the company had to reduce expenses.

The solution became to relocate production to Stettin. Unemployment in the city and surrounding areas was 27 percent back then, and people gladly stood in line to get a job.

However, he quickly noticed that there was much more get than just cheap labor.

“There is a completely different working ethic here than in Denmark. For example, I never see anyone have their mobile phones out in production,” says Kim Strøm and clarifies, that especially the women are extremely reliable – especially in an electronics production, which demands great patience to make and check even the smallest solders in a circuit.

70 percent of the employees in Eltwins production are therefore women, “and I gladly saw even more,” he adds.

Among other companies in the area, it is according to Kim Strøm not uncommon to have an employee turnover rate of 25 percent per year. Because as he says, “when minimum wages go up, the rest also expect increased salaries. And then especially men have a habit of moving jobs towards where the salaries are the highest.”

At Eltwin it has so far been possible to keep turnover below three percent a year. Kim Strøm believes this is in particular caused by women valuing stability more. He has therefore as one of the few local employers offered them flexible working hours, so they have time to take children to the doctor or other unpredictable family obligations that may pop up.

“It works really well. I would prefer to not relocate the entire production again and say goodbye to the employees – even if it may be the last resort,” he says. 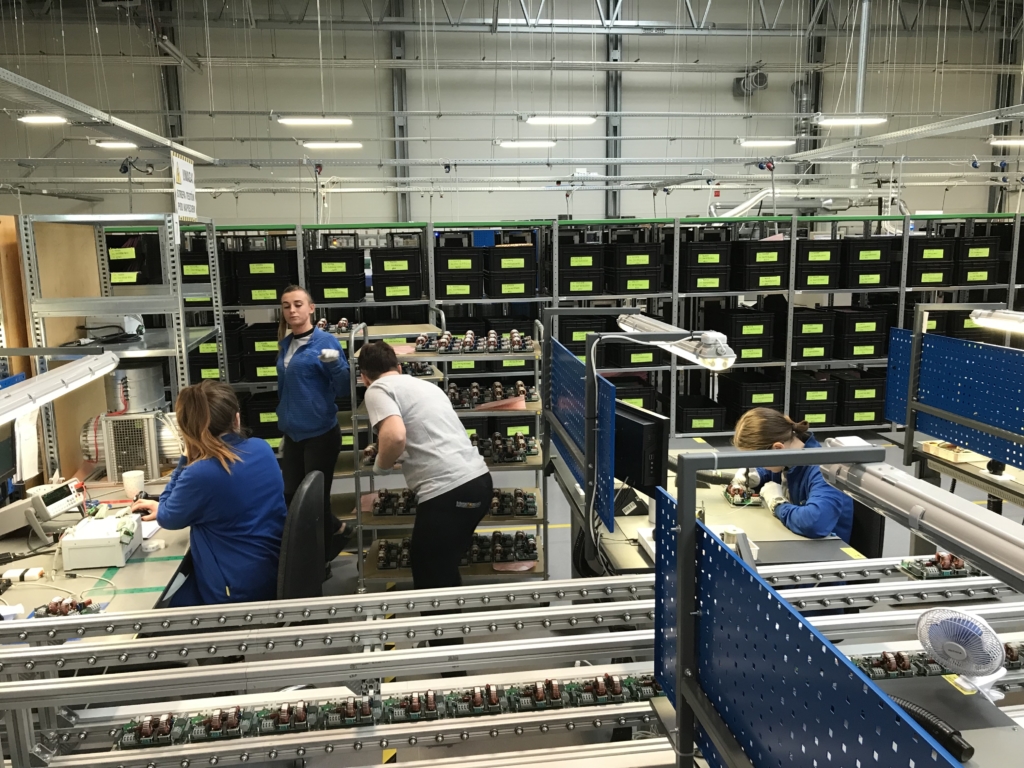 Eltwin produces control units for heating pumps among other things. In the Polish factory, 70 percent of employees are women. The company relocated production from Denmark in 2011 – a decision, that not only saved the company, but also every single of its jobs at home.

Robots and automation can solve the employee crisis

Instead of waiting and seeing, Kim Strøm is now investigating the potential for robots and automation of production. Robots, he hopes, will be able to take over the most routine tasks and improve the quality of production – and in this manner ensure the survival of the factory in the future.

“It is quality, which is the driving force. No one can ensure stability like a robot. If we at the same time can save some money, it would be an added bonus,” he says.

Also read: 8 reasons why companies buy robots – and no, it’s not just about replacing people

Already after the first inspection, multiple options have come up. Among others, mobile robots would be able to transport items between different workstations. And a test robot would be able to remove a significant bottleneck in production.

“There is a great potential for automation for automating the factory, among others because there are many low hanging fruits in the shape of monotonous repetitive work, which can be solved with fairly well known and tested automation solutions.,” says robot engineer and partner at Gain & Co, Mikkel Viager, after having reviewed the production of Eltwin.

For Kim Strøm, the robots won’t just be an advantage for his business. Employees can avoid monotonous, repetitive work – and they realize this, he tells.

“The Polish employees are quite positive about automation as they can see, they will be moved to other and better tasks,” he finishes.